New to the forum? Tell us a bit about yourself here

You're welcome Mike, if you sign up for ECPs emails, they send you promo codes etc as and when they come along. One of the good ones is a free oil filter with 5L of oil, the other one is BOGOF on oil, buy one, get one free. They still do promo codes so you end up getting 10L of good oil for about £12, sometimes with a free filter (or two) as well.

Also another handy little tip is to add between 0.5-1.0L of synthetic ATF to the engine oil, it helps clean the engine, revives oil seals and sorts out hydraulic tappets. It can also help sticky piston rings to free off and helps keep the PCV system clean, which all helps emissions and general running, power and economy.

Top Tips. Well appreciated!
I did load in some ATF last year after one of your other posts.
Will look at the oil etc for my 416 Tourer at the same time.

You're very welcome Mike. Your 416 Tourer, is it the Honda engined (D16 if memory serves) one or the later Rover K-Series powered version?
Cheers,
Dave

I think 98 was the changeover year, they still had some Honda engines left from before the "divorce" so used them while they were there to buy time for the K-series development.
Cheers,
Dave

The R8 400 (square shape) used Honda D-series engines for all 1.6 litre applications. The "bubble" 400 (HH-R), launched in 1996, used the K series for manual cars under 2 litres with the exception of using the Honda D-series for the autos (the manual 1.6 cars all had K series). This was because no suitable autobox was available for the K-series at first, although the later 45 auto used the K series with a Sachs CVT.

Thanks RIchard - many moons ago i had a 416SLi auto on a J plate, went like stink and only a SOHC if memory serves. Think it was the 416 (and 216) GSi that got the DOHC unit, had a 416GSi as a company car in late 1990 for a few days until black ice turned it into a Sierra hatchback!

Hi Guys. Happy boy here (not to premature I hope) just done a quick 200 mile test drive to Cornwall and back using Motorway+ A and B roads.
Had the car in a local garage this week for MOT and fix. They did a smoke test and found the rocker cover had a leak. Put some rubber seal in and that stopped the idling problem. However the stalling issue was still intermittent. One mechanic realised the petrol tank had a vacume. Which suggested a problem. Driving it away from the garage it stalled.
Last night I drilled a 1mm hole through the centre of the petrol cap and took it out this morning at 5.30am and kept going and going. The Car never missed a beat and was fantastic to drive.
So a couple quick questions.
- Is there a valve in the petrol tank that is changeable?
Not sure if my temp fix will allow the petrol to evaporate over time. I was thinking of taping over the hole or putting a screw into the 1mm hole if parked up for long term.
- Is there a Petrol Cap on the Market with an Air Valve?

There should be a hiss when you remove the cap - your mechanic needs :

I think i have a spare cap, PM me your address and i'll send it to you on STRICT CONDITION you go nowhere near it with a drill!

It's possible the valve in your old cap had failed, it's meant to allow some pressurising, the emissions system (including the charcoal canisters under the bonnet) deal with the excess vapour build up.

I'd also suggest checking and cleaning the PCV components on the engine including the throttle body.

Ahhh. It was desperation on my behalf. After I had driven it home from the garage. I was pig sick of it stalling in the town centre. But it was worth it for the drive I had today. If anything it seems to have narrowed down the fault. Will be driving it shortly, so see if it behaves.

Will look at the fuel pipes.

Struggling to see the Breather Pipes around the filler hole. Cannot feel anything within the fuel filler. Am I looking in the wrong place?

ThisIsMadeInEngland wrote: ↑
Sat Jul 21, 2018 1:24 pm
Struggling to see the Breather Pipes around the filler hole. Cannot feel anything within the fuel filler. Am I looking in the wrong place? 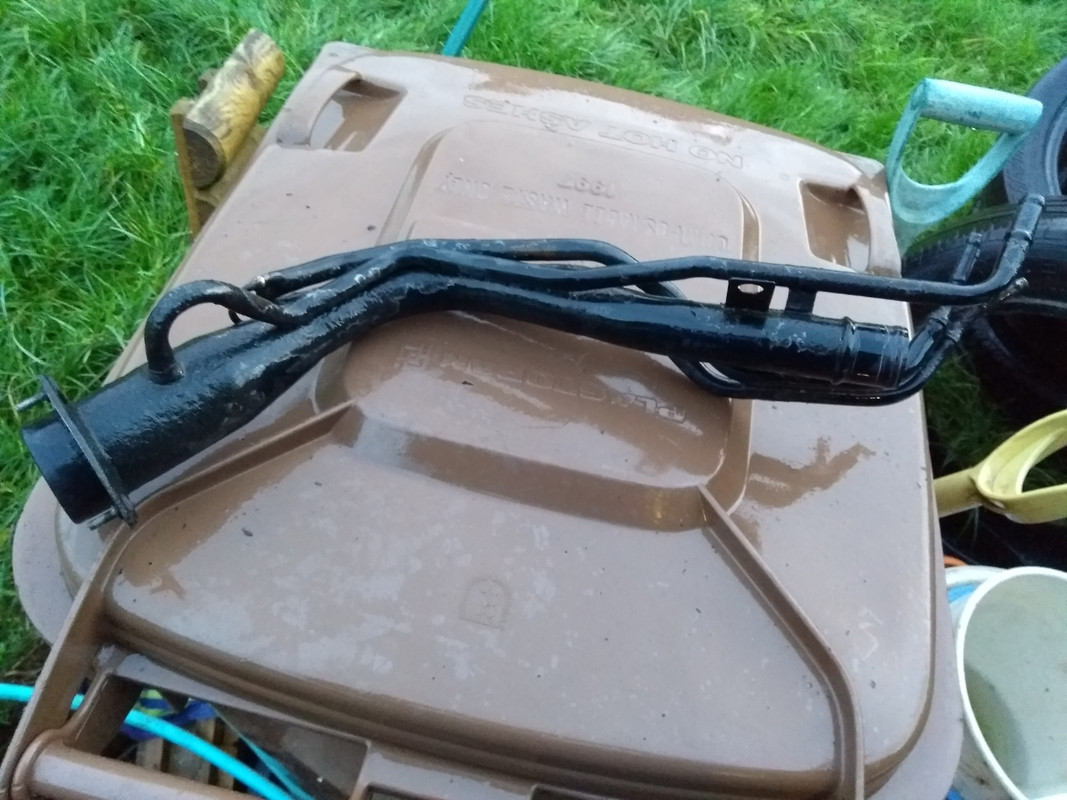 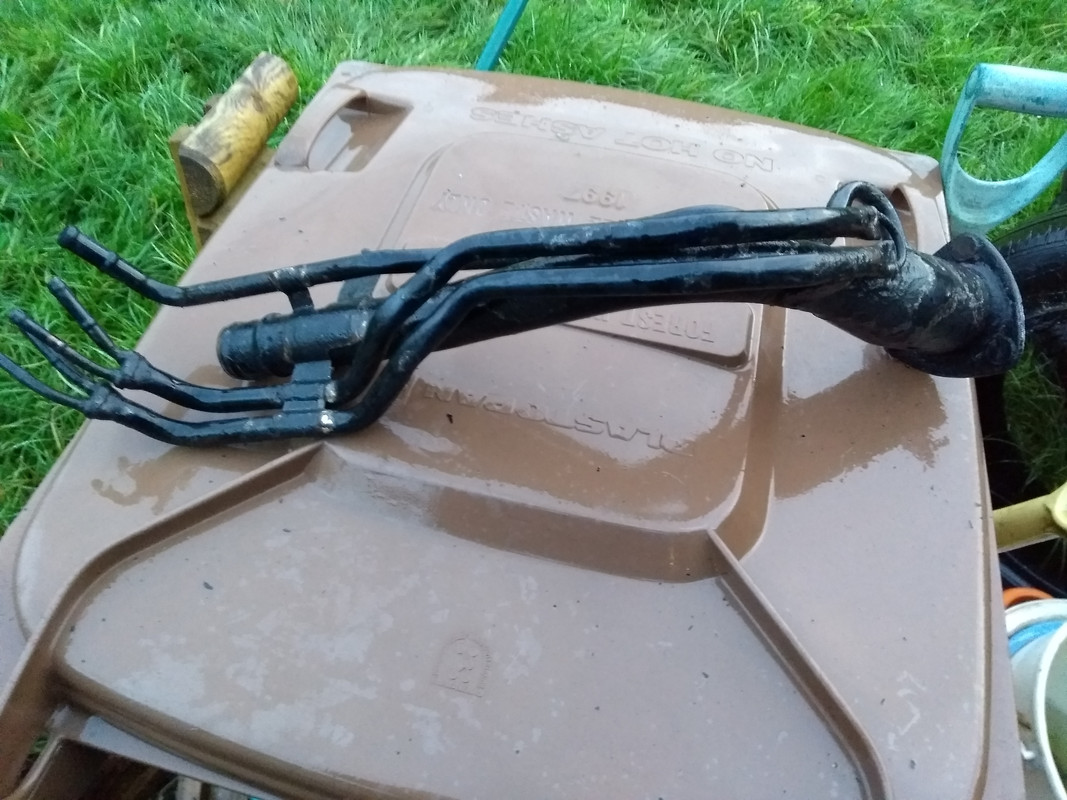 That's what the filler neck should look like - the small ends of the vapour separator loops are different sizes and because of the length of them, all 4 pipes are difficult to get on in the wrong place.

However, a word of warning - there is a valve which sits in the top of the tank and it's easy to 1) pull the pipe off that valve and 2) pull the valve out of the tank if too much force is used in either case.

On the second one the tank has to be dropped to refit the valve, in the first case if you have long thin (ish) fingers and are lucky, you can get the hose back on the stub.

Usually if the 1/2" bore breather pipe on the side/top of the filler gets blocked, it's very difficult to fill the car up.
Thinking more about your cutting out problem, if none of the pipes are blanked off (by any means - crushed, blocked, disconnected and plugged etc including at the engine bay end) then there is a chance your fuel pump is getting weak.

If it is getting weak then it can pump fuel with the extra hole you've drilled (atmospheric pressure assisting) but not for an extended period with an "unmolested" cap as it should have.
A good diagnostic test would have been to remove the cap when the car stopped and try again, if it worked for a similar distance, that would point to either a weak pump, blocked hoses somewhere or possibly a blocked fuel filter.
Might pay to fit a self-tapper with a splat of silicone sealant in the hole you drilled and see if the cutting out returns. If so, does it restart immediately, if not does removing and refitting the cap allow it to restart and run for a similar time?

You're fairly lucky if the pump is weak as you have an 820 Si, that means any 800 petrol pump will fit and work. If you had a turbo or an 827 they need a higher pressure and flow pump.

Also i think i have a spare pump in the shed, i can check shortly but i've found the fuel cap and it even has a new (home-made but still right) rubber seal on it.

WOW! Need to 're read this a few times to digest the info.
Thanks for all the effort in detailing it to me. Will look again at it later.

You're welcome Mike - i do have a fuel pump lurking in the shed if the need arises.

'95 827 Coupé LPG gone but not forgotten!
Top
Post Reply [phpBB Debug] PHP Warning: in file [ROOT]/vendor/twig/twig/lib/Twig/Extension/Core.php on line 1266: count(): Parameter must be an array or an object that implements Countable

Users browsing this forum: No registered users and 3 guests