Please post pictures, specifications and worklogs of your cars in here.

It has been a while sins i have been on the forum but i hope that all the members are still enjoying their cars and are doing fine!! The work that i have done on the car was also on the introduction page but because it should be here i remade it here or else there is an ''new'' intro every time i do something on my car

. At the bottom there is an update of the recent work on the car

). During the years i did some little cosmetic things and did some technical maintenance with my friend/mechanic who is a Rover fan as well

At the top of the rear window the old Rubber (covering stainless steel) was dried out and was letting go. Stone chip sprayed it with satin black finish. 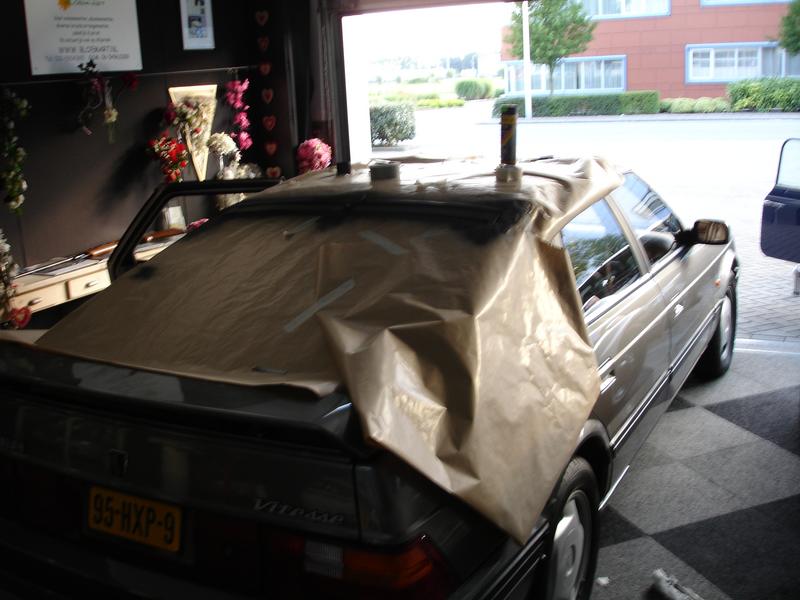 Front bumper had some minor battle scars, i sprayed on Stone chip spray and then some satin black to finish it. 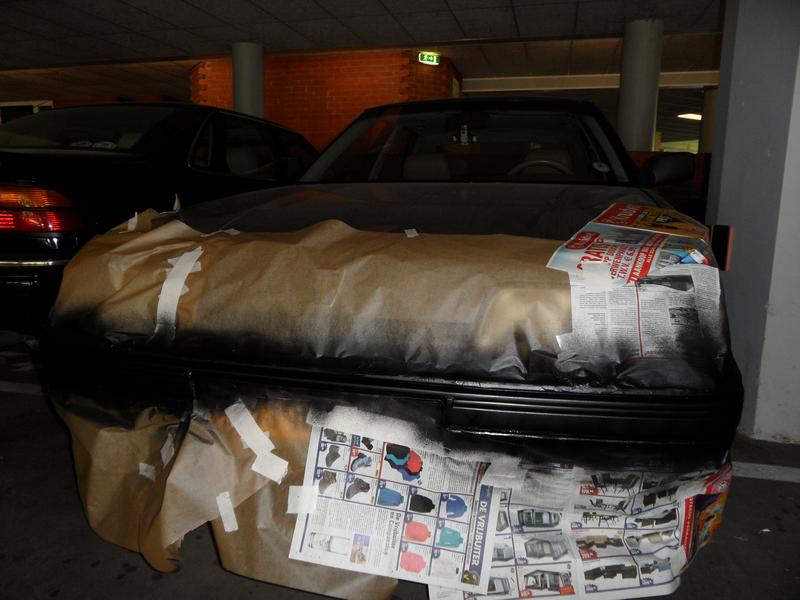 At the aft of the Vitesse, the license plate holder looked a bit tired because the red turned grey and white. Dried out plastic. Sand papered it, plastic primer, red lacquer and clear varnish. 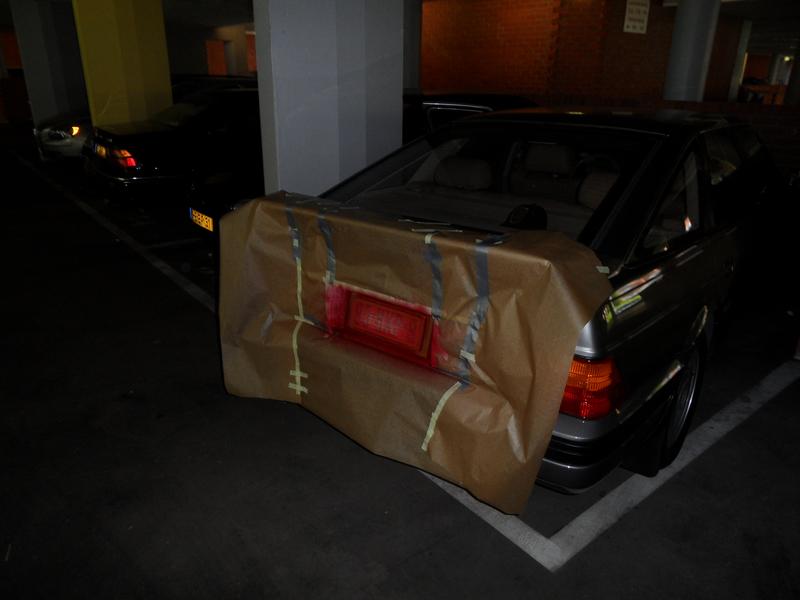 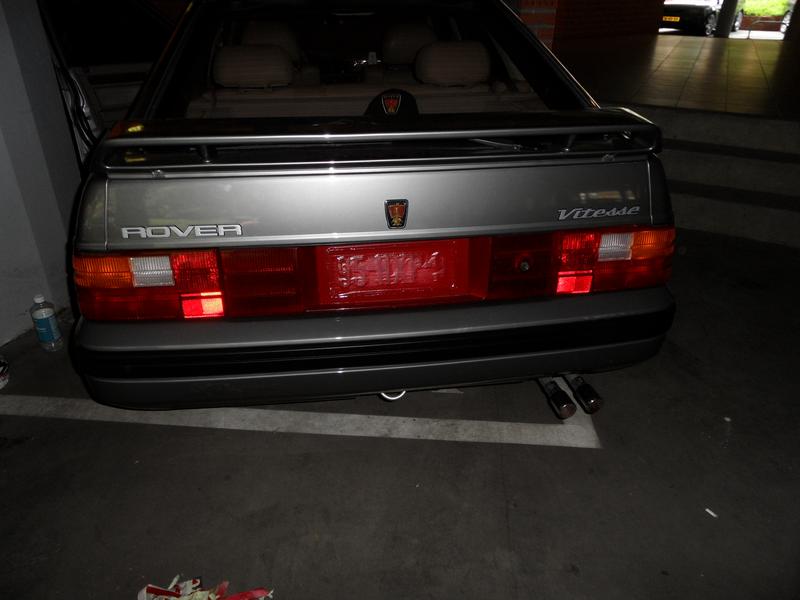 And i almost forgot these cosmetic things: The center caps have a Rover logo, as you know, but they were silver and i prefer black because it looks more sorted. Lie down on a mat and with a permanent marker this was the result 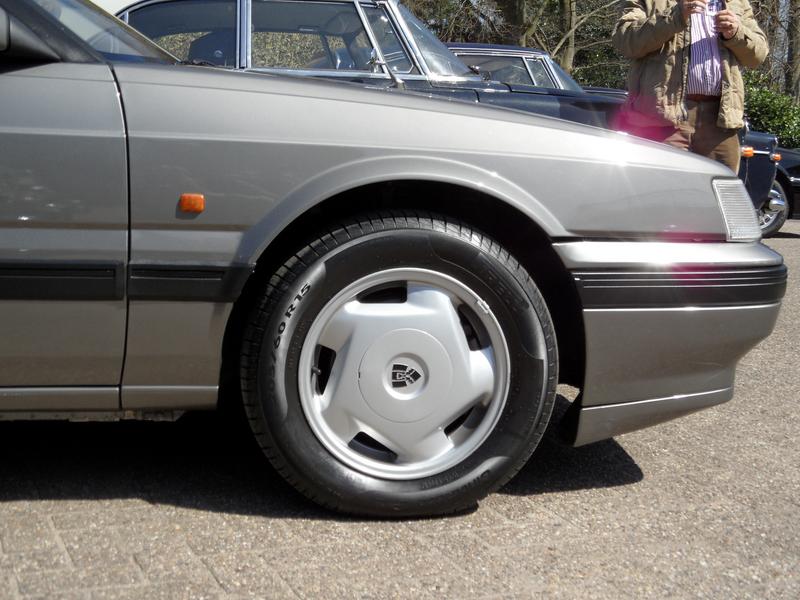 The leather steering wheel was in need of some TLC, the leather was fine however the paint was deteriorating. I wanted to be certain that the leather was preserved and the colour correct so i went to a Leather specialist and left him my headrest to mix the proper colour. Next day, i could collect the headrest and a 26 euro container containing the correct colour. And most important i received info how to make my steering wheel look and feel fresh. Sand of most of the old paint and then smooth it out with a milder sand paper. Remove grease with thinner and leave it alone for a while. After 15 minutes of masking the instruments i used the yellow side of a kitchen sponge to ad the paint in layers. With every layer the wheel was looking better and better. The result is not bad for an amateur 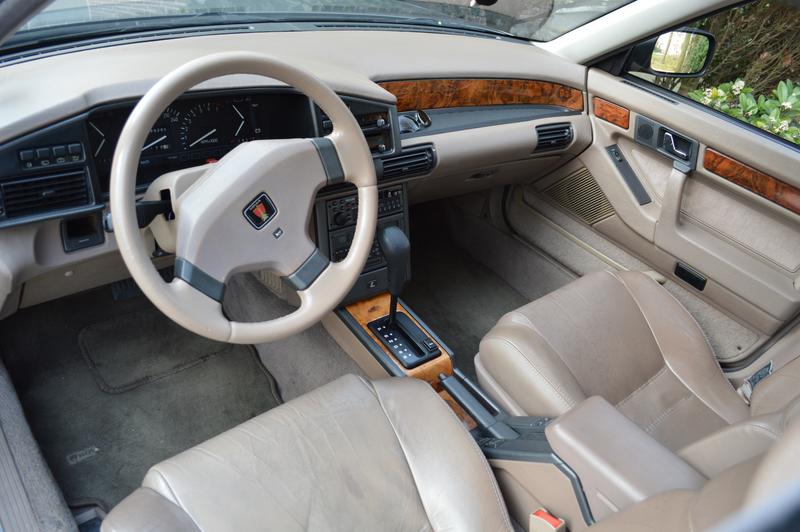 .
- New front suspension rubbers, the old ones were a bit old and tired (because the car was stationary for a long time with the previous owner).
- 2013: New Timing belt, water pump, belt-tensioner, external belts. 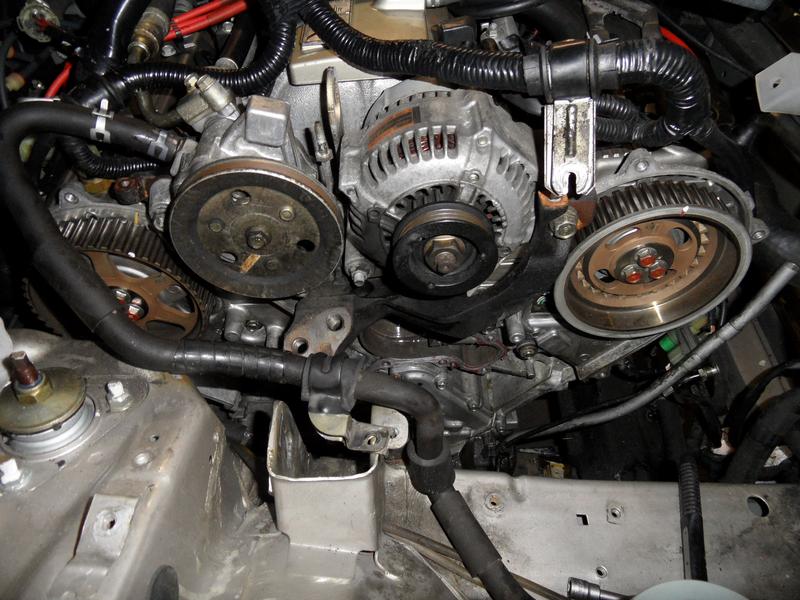 - 2013: New radiator installed because the old one had a small leak when the system was at pressure and because the cooling system was open (prev pic and maintenance) i decided to order a new one. 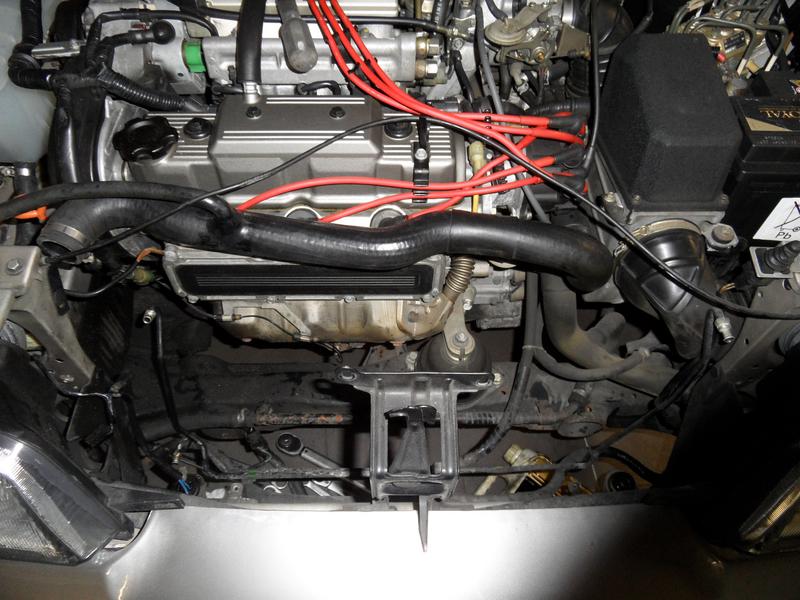 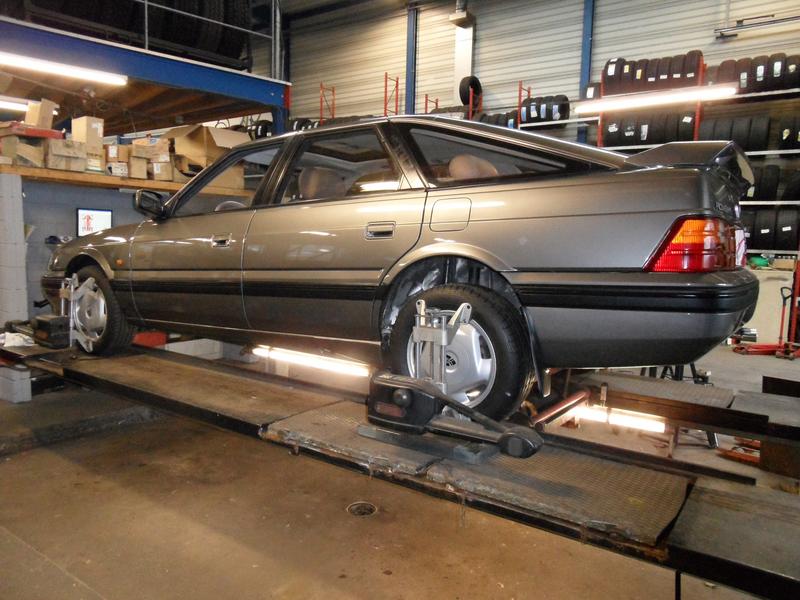 - 2014: Automatic transmission flushed to be sure that the oil is top nudge. 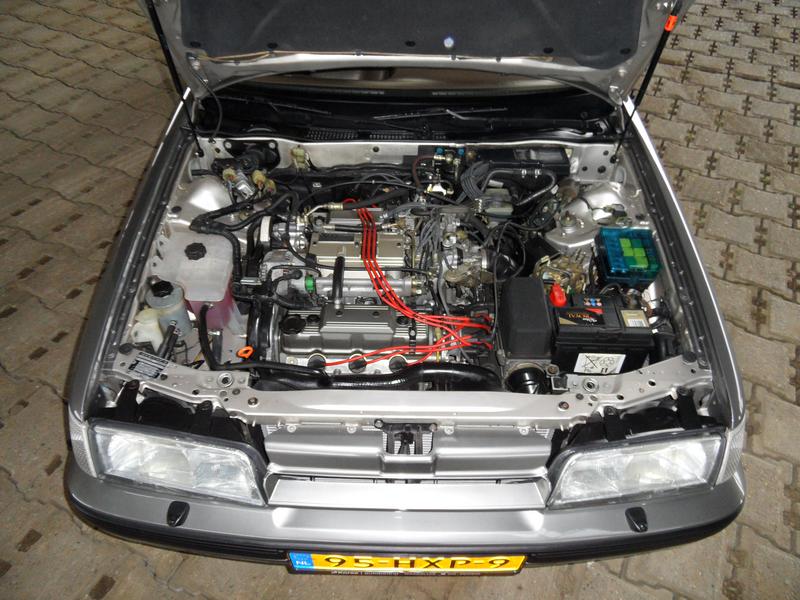 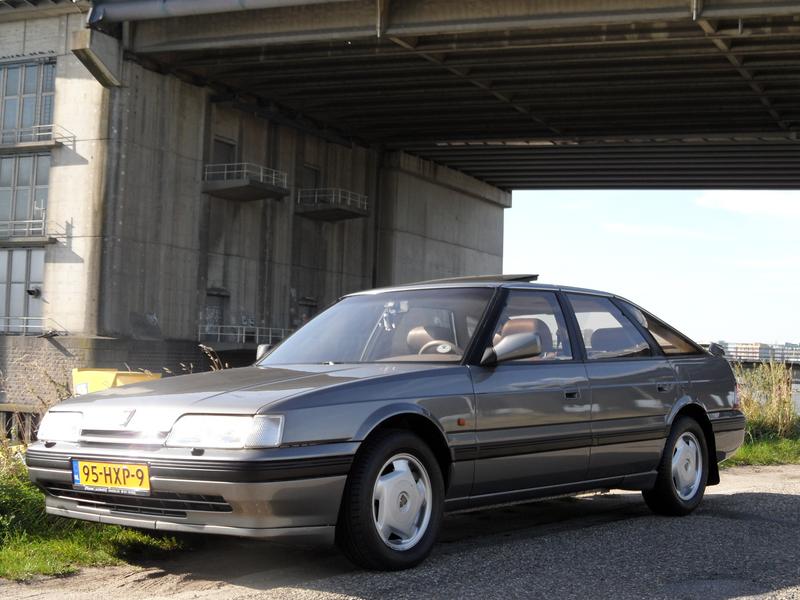 Some members already know but here is to non facebookers; i replaced the rear, small license plate holder and plate by a bigger license plate holder and a normal EU plate because i think it looks better. It makes the car look wider and when i go abroad i do not have to put an NL sticker on the back of the car.
The weather was great and i went for a long drive to a friend near Amsterdam and i had a absolute blast flooring the V6 a couple of times down the country lanes and small/narrow streets

Because the weather was great and the car and it surroundings were also lovely i had to take some pictures! I hope you like them 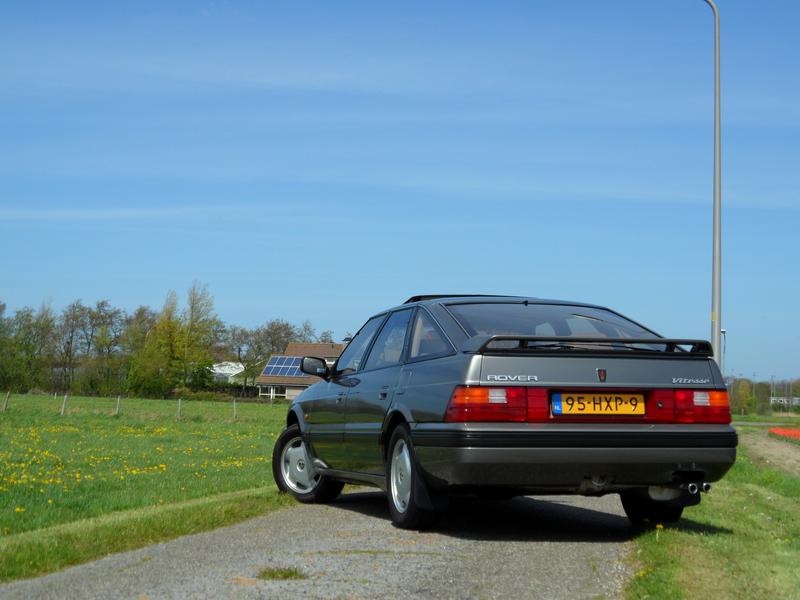 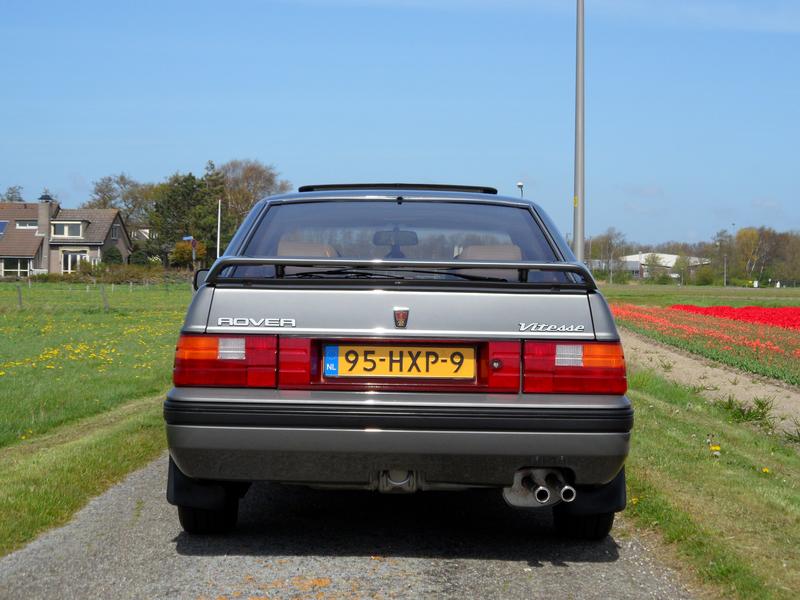 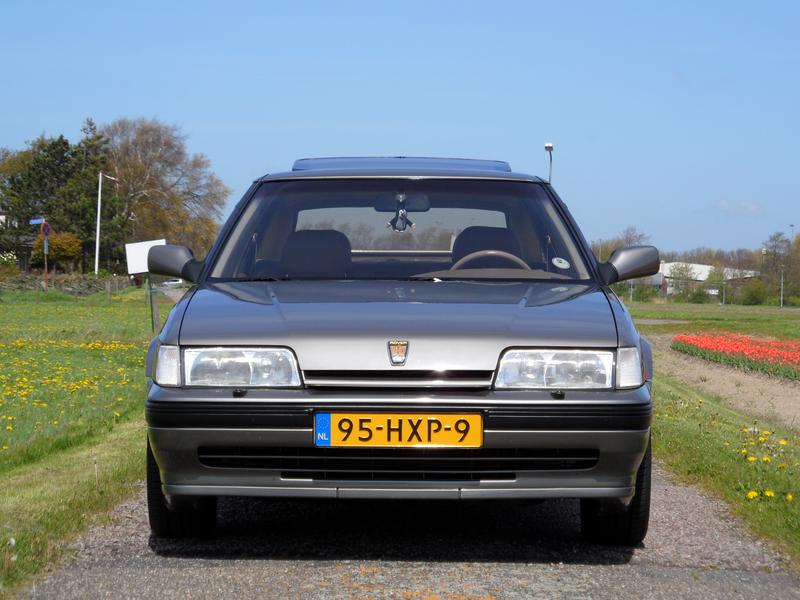 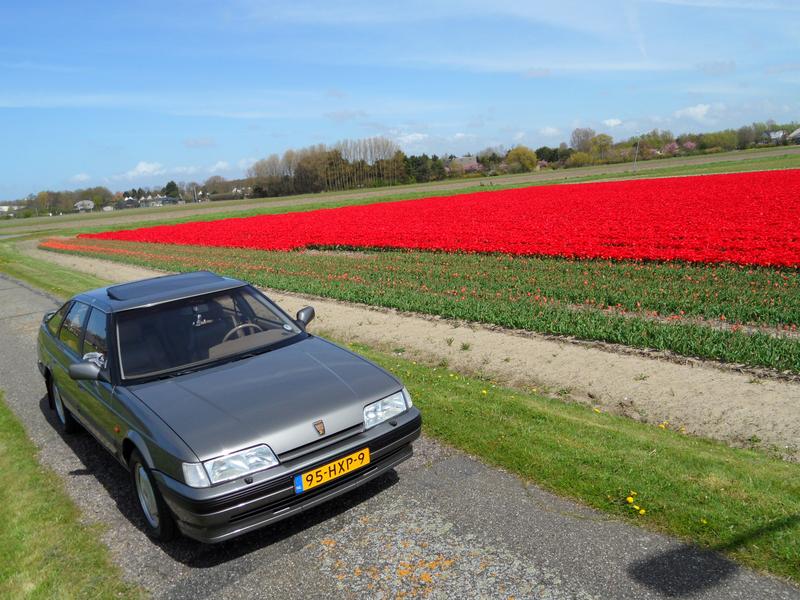 Update:
A friend of mine has a do it yourself garage and i used one of his lifts to give my Vitesse a protection tectyl coating to prevent rust. First we checked if the Vitesse was as clean as predicted.Very clean and 0% rust !! The beams and underside and crucial points where coated 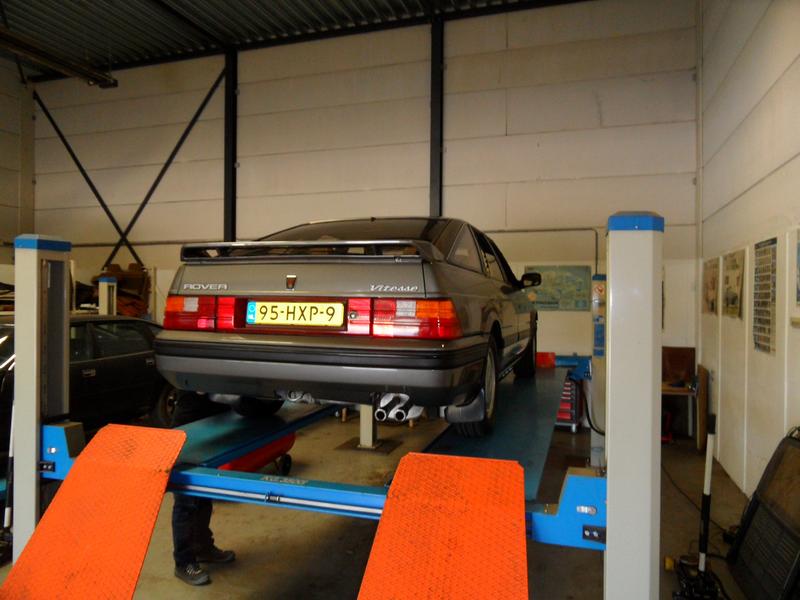 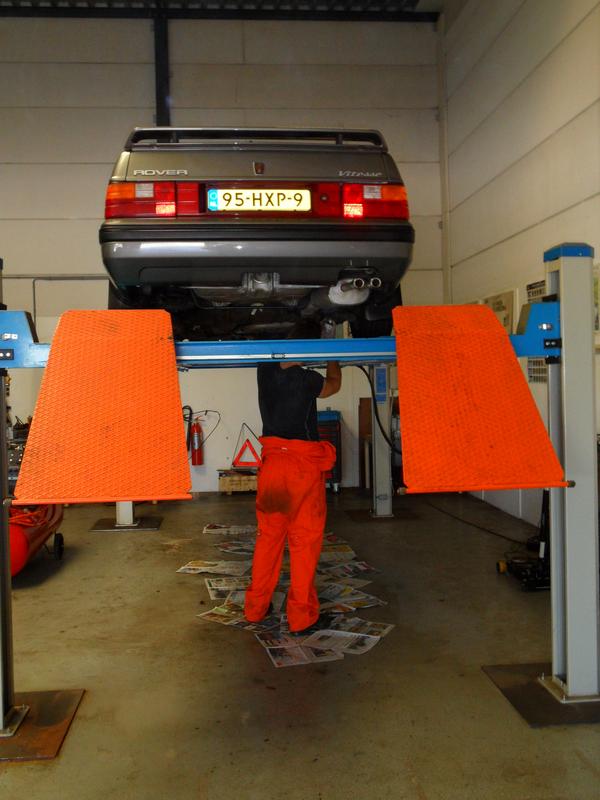 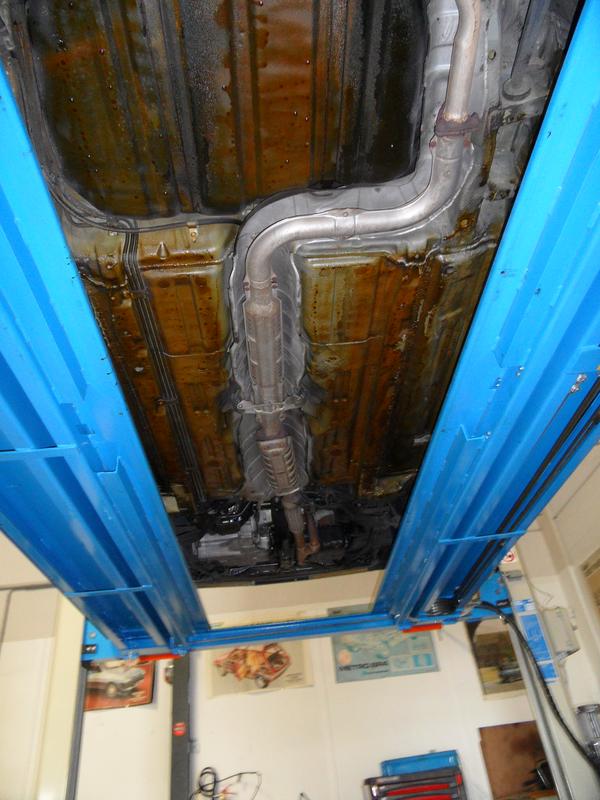 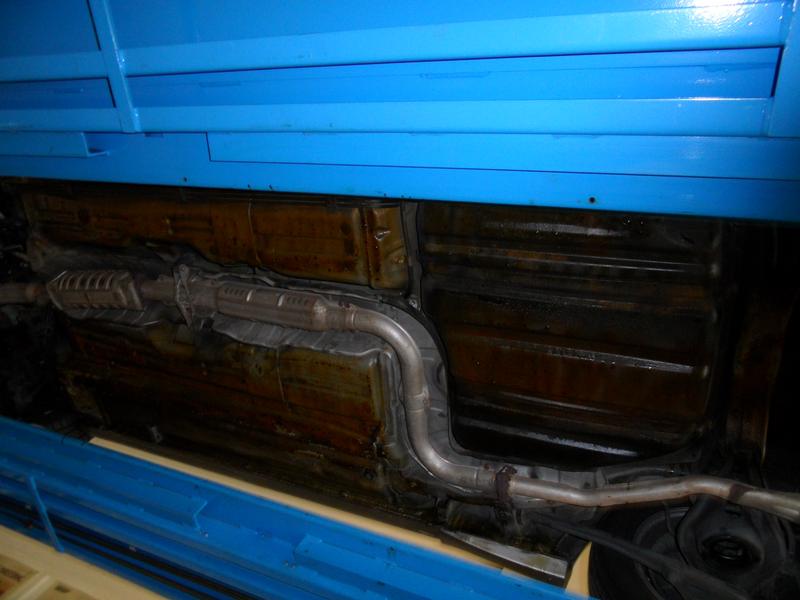 Changed the wood on the dash. On earlier pictures you can see the old lacquer was really looking tired. With some advice from Ryan on Facebook and other enthusiasts i felt confident enough and removed the old one and install the much better one. As seen on the pictures it is not in 100% condition with minor cracks in the clear lacquer but a 100% better than the one that went before.

Cleaned and ready to be installed 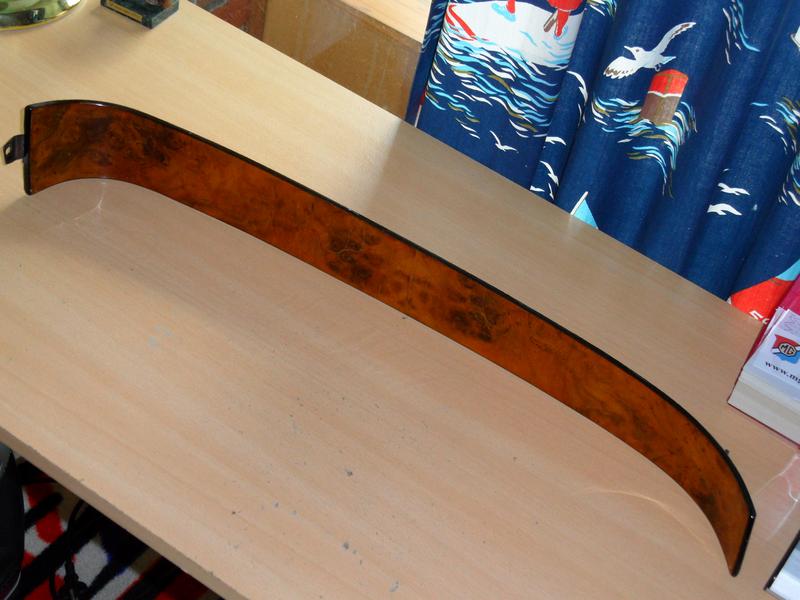 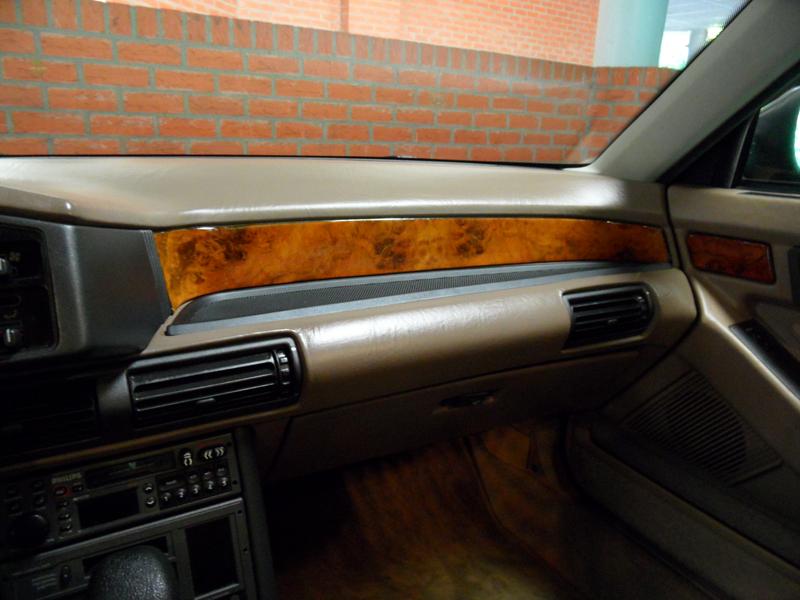 What a great looking car, looks like it has just left the factory. Its nice to see a car in this condition. Reminds me of the "Britisher Architect" advertisement for the 800 that used to run on British TV. Thanks for posting.
1992 820SI saloon.
Top

Always a pleasure to photos of you car Marc, it really is a lovely condition car.

Thanks for sharing the pictures Marc
Rover Vitesse Coupe - 1997
Top

Thank you for the great reactions!!

And you are very welcome

Very nice, far too clean can you take it out in the rain down the same country roads then take some more pics

would make me feel better about mine.
Mk2 Vitesse Fastback

This is the least clean pictures of the car

. It is made during a road trip in France. 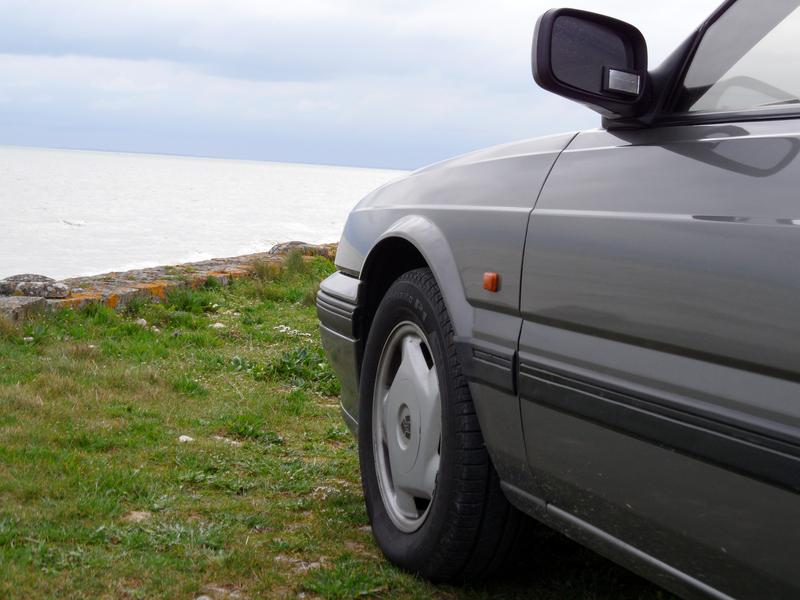 This weekend i enjoyed my Vitesse again by taking it for a cruise to see a friend of mine in Belgium. The next day i went to a ''Best of British'' car event in Boxtel and when i drove to this event the clock turned over to 100 000 kms (62 000 miles) !!! 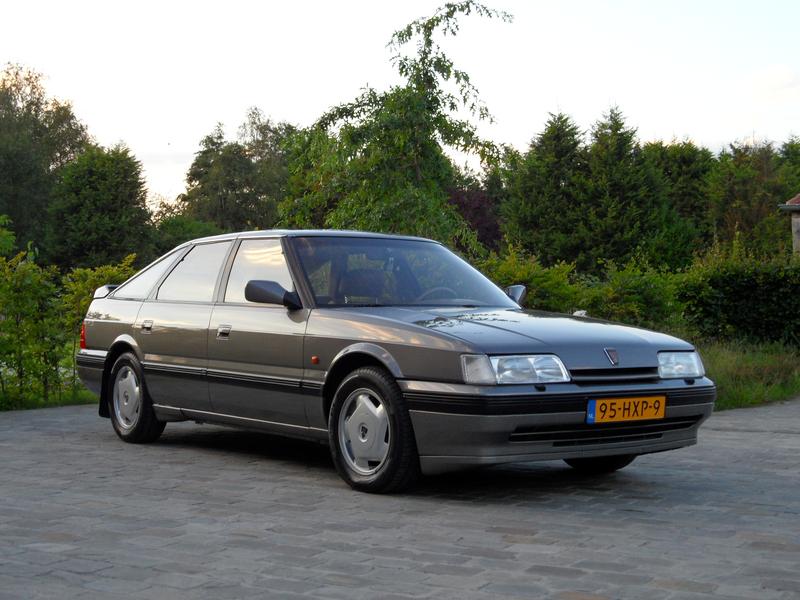 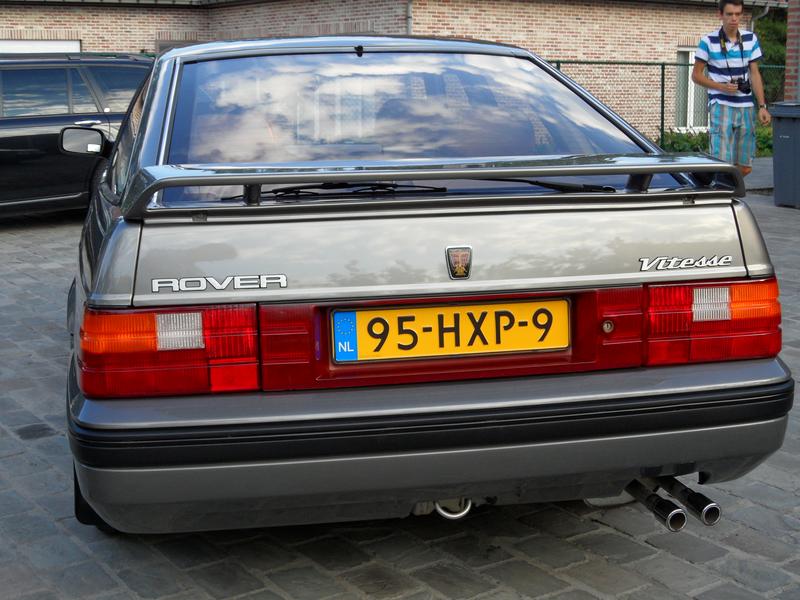 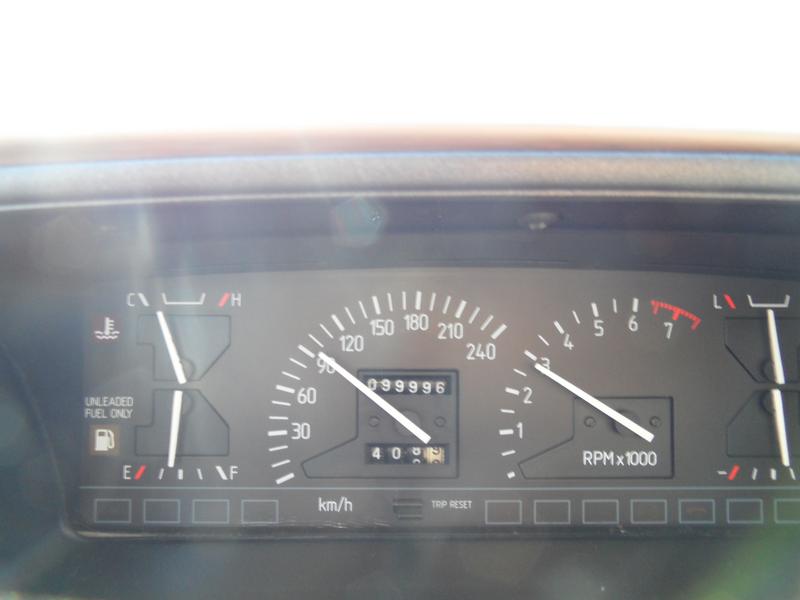 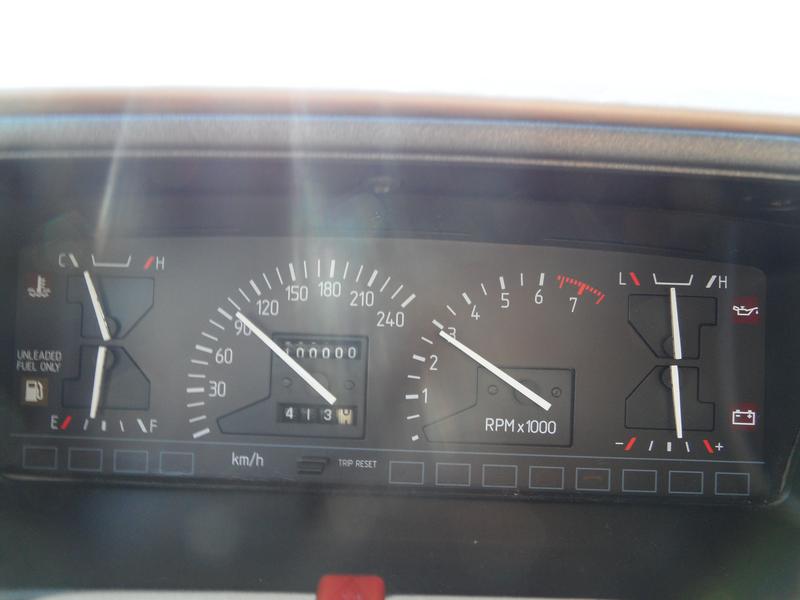 At the ''Best of British'' event there was a Concours d'Elegance and even though the price went to a freshly restored Jaguar the judges stated that the Vitesse is very rare and in exceptional good condition!! 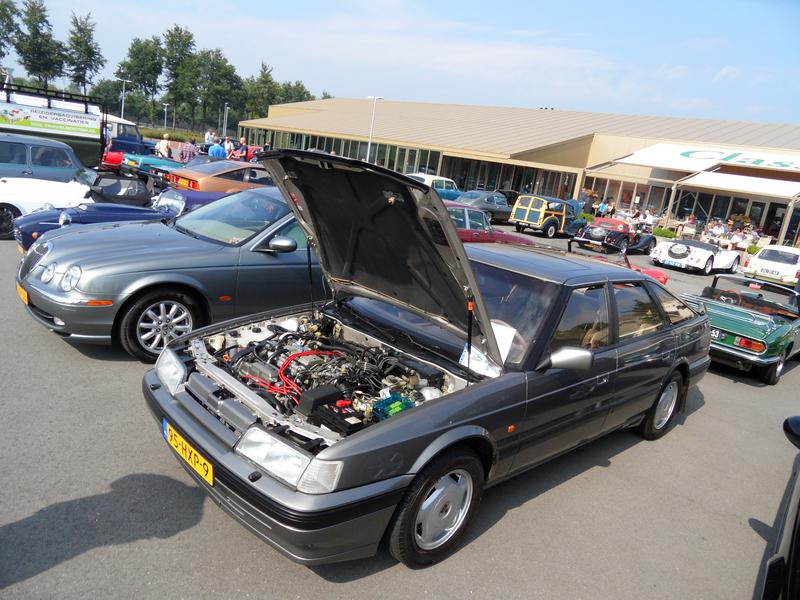 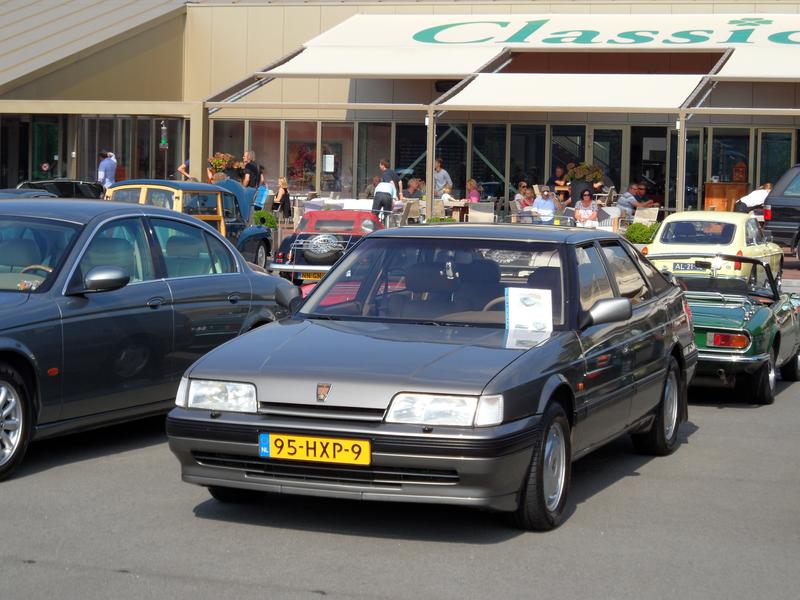 Matt, I think you need a good scrub down with carbolic soap and made to sit on the naughty step until you realise such bad language will not be tolerated.

midnite wrote:then they said get that goddamn honda outa here.

No they did not say that because that would not be a smart move to say that to me (6.7 foot tall and 100 kilo's

) and because:
On the left there was a Ford (S-type), on the right a Ford (X-type) in the background a Buick (SD1), BMW (75's) and later on a Chrysler (Jensen) turned up. Even the Rolls in the background has many GM parts. Many great cars have parts that are from other manufacturers. Even in the olden days. As long as the total package is a winner it is fine by me.
1989 Rover 827 Vitesse.
1982 Rover 3500 Vanden Plas.
Top

midnite wrote:then they said get that goddamn honda outa here.

Top
Post Reply [phpBB Debug] PHP Warning: in file [ROOT]/vendor/twig/twig/lib/Twig/Extension/Core.php on line 1266: count(): Parameter must be an array or an object that implements Countable

Users browsing this forum: No registered users and 10 guests